Growing up, my mom was always the master of cooking breakfast with the microwave. I was always amazed at how she could cook a huge bowl of scrambled eggs, followed by a plate of bacon, using the small little microwave in our kitchen. After watching her magical microwave ways, I always settled for cooking bacon in the microwave as I got older. It seemed like the most convenient method, and honestly, the easiest method for cleaning up grease.

But now that I’m, what one may deem, an educated food editor, I had to question my former thinking: Was cooking bacon in the microwave really the best way to do it? Not in terms of cleaning, because we all know bacon just gets messy and wafts in your kitchen for days. But in terms of taste, is microwave truly king? Or are the other two methods—stovetop and oven—the better methods? And no, you do not want to grill bacon. Trust us.

I put this logic to the test by cooking bacon three different ways. Here’s what I have concluded to be the tastiest way to cook bacon.

While this seems to be the classic way to cook a few slices of bacon, cooking bacon on the stovetop was definitely not up to par compared to the microwave or the oven. To cook the bacon, I used a cast-iron skillet over medium-low heat. I watched the bacon as it cooked, flipping the slices when it seemed appropriate to flip—usually after two or three minutes. After the first flip, the bacon was still uncooked. When it was ready to flip again, the bacon on the top still seemed uncooked. But when I flipped it, the bottom was almost charred.

Now I admit, I am not an expert at cooking bacon the stovetop, I’ve only done it a few times. Apparently, bacon needs an even lower heat to cook on a stovetop and a longer period of time. Yet, if bacon on the stovetop is going to be that fickle compared to the ease of cooking it in the microwave or oven, it seems almost pointless to cook bacon using this method.

Once the bacon was removed from the pan, there were numerous parts that were still completely uncooked—while other parts of the slice were burnt to a crisp. It tasted fine—still salty and crispy like a slice of bacon—but it really wasn’t that pleasant to eat.

I admit, eating bacon cooked from the microwave does spark a hint of nostalgia for me. But after tasting all three styles together, I actually don’t think this is the best way to cook bacon. I find that cooking the bacon for 3 minutes, waiting for 30 seconds, then cooking it for 1 more minute makes the bacon that perfect, crispy texture that I like. However, parts of the slice were not thoroughly cooked all the way. I found myself having some delicious bites of the bacon, while other bites were chewier, which made it difficult to even bite all the way through.

While cooking in the microwave seems easier to control compared to the stovetop, it didn’t end up at the top of my list. There was still some inconsistency in the bacon’s cooked texture, docking it to second place overall.

It may take longer to cook bacon in this way, but honestly, it’s worth the wait. Bacon from the oven is perfectly crispy and greasy, just like what I would expect from a diner. The texture is consistent, and there were no parts of the bacon left uncooked—each piece was cooked evenly.

To cook bacon in the oven, place a piece of parchment paper on a baking sheet. Lay down the slices, and bake it in a 400-degree pre-heated oven for about 20 minutes. If you like a chewier bacon, check it at 15 minutes and see if it’s to your liking. 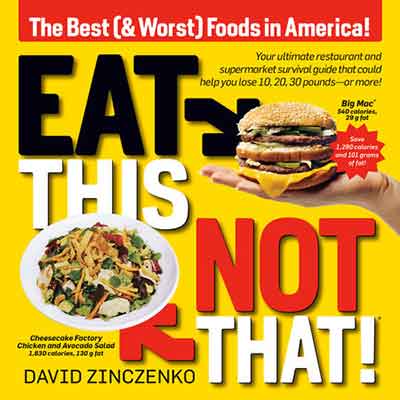 Get the New Book!

Want to lose 10, 20, even 30 pounds—all without dieting?! Get your copy of Eat This, Not That: The Best (& Worst) Foods in America!, and learn how to indulge smarter and lose weight fast!

Cheap Supplies Every Newbie Chef Will Need to #MakeYourMove to Healthy Eating | A...

Ugly Side Effects of Not Working Out, According to Science

How to Lose Hip Fat: 20 Ways to Slim Your Hips

Orange Blossom Julep Recipe | Eat This Not That